Under here i´ll show the various models made by Jensen Mfg. through the years.

This will mostly be examples from my own collection of Jensen engines, but in cases where i don´t own a particular model, pictures from fellow collectors, will be shown with due credit.

I don´t necessarily display the best or rarest of each model, and not every variation available either, as the purpose here isn´t to display my own entire collection, but to illustrate the models and their characteristics.

This doubleacting oscillator was part of the Jensen line from the 1930´s until the mid-60´s.

A very strong and smooth running engine, which rightfully should be a part of any serious Jensen collection. 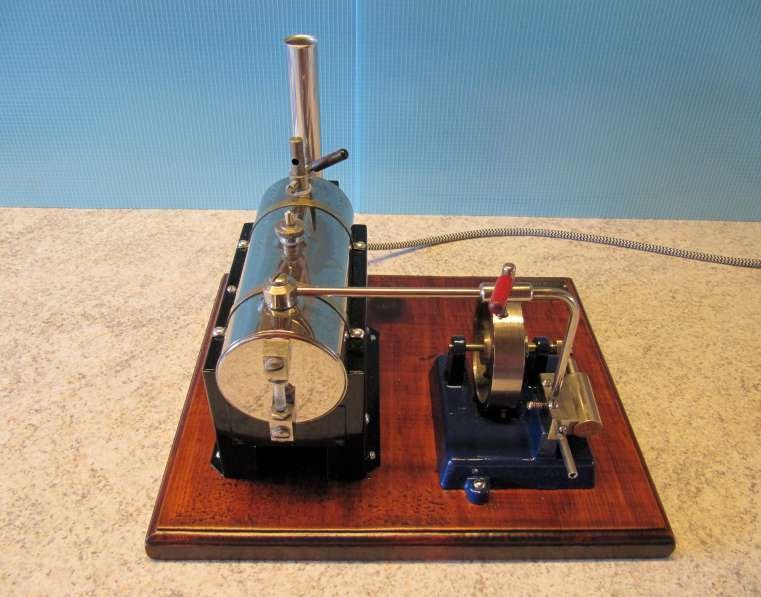 These powerplants, carrying the 25 boiler/cylinder, is highly collectable engines, and especially in the older versions, with engine and generator sharing the same cast iron base.

Model 10 was made with little visual change from the early 30´s until 1951, with mainly riveted boilers changing to non-riveted, and the lamppost moving from the wooden board unto the cast iron engine base post WWII.

In 1951 the shortlived  "Omega" variation with its round closed magnet, ended the era of  shared bases.

In 1952 where the present type 3 piece magnet was introduced, the model 10 had its usual combo of engine/generator divided into a standard 25 engine hauling a standalone 15 generator on same plywood board.

The model was kept in the productionline until the late 1970´s, where the cast base 15 was decommisioned.

From 2003 it was somewhat revived by the present model 25G. 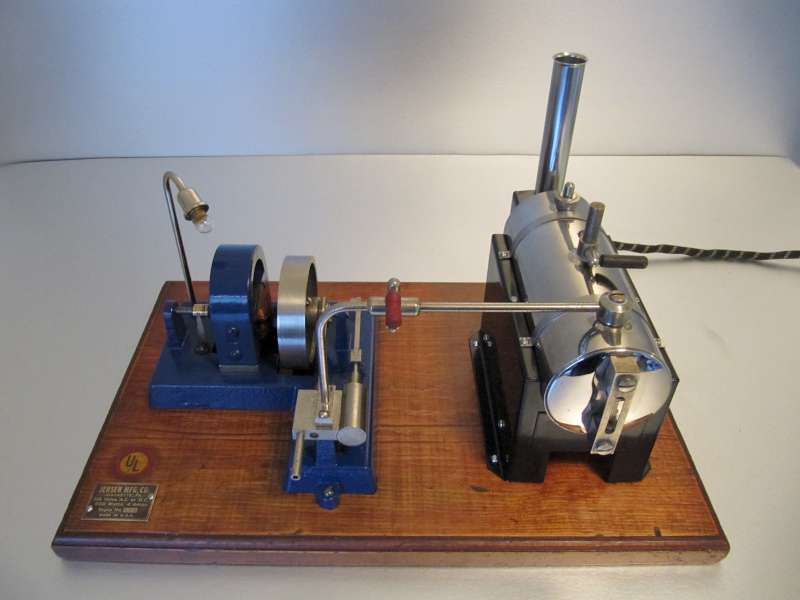 The standalone model 15 generator, is an oldie as well, and has been offered in quite a few variations since the 1930´s until today.

From a collector´s point of view, age is naturally of importance, and everything incl. and before the very rare 1951 "Omega" magnet type, is highly desirable...and costly. 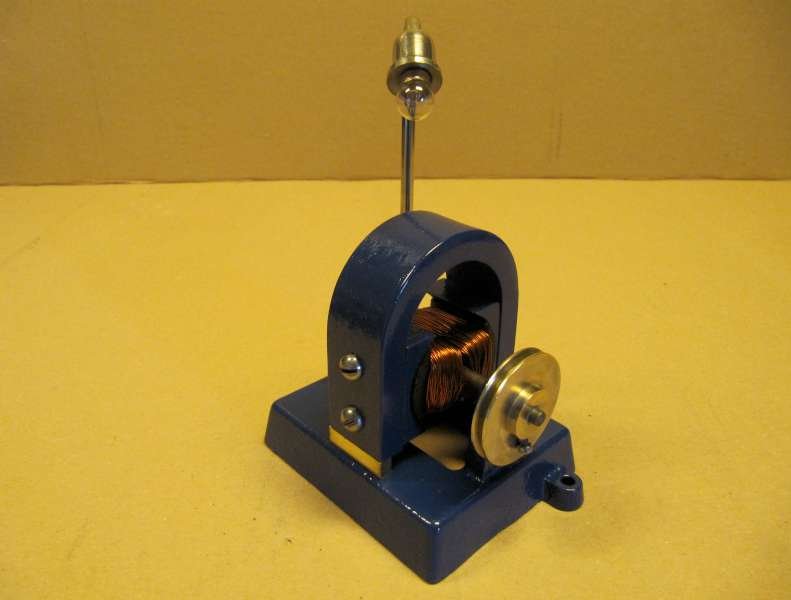 I am not aware of ANY other affordable toy steam engine, displaying this amount of power and quality.

The model 20 has been a part of Jensen´s productionline since the early 1930´s, and continues to be today.

After 1992, when the G designation was introduced, all Jensen 20 plants carrying a generator has been known as 20G, before that time they we´re known as the "Big Power Plant". 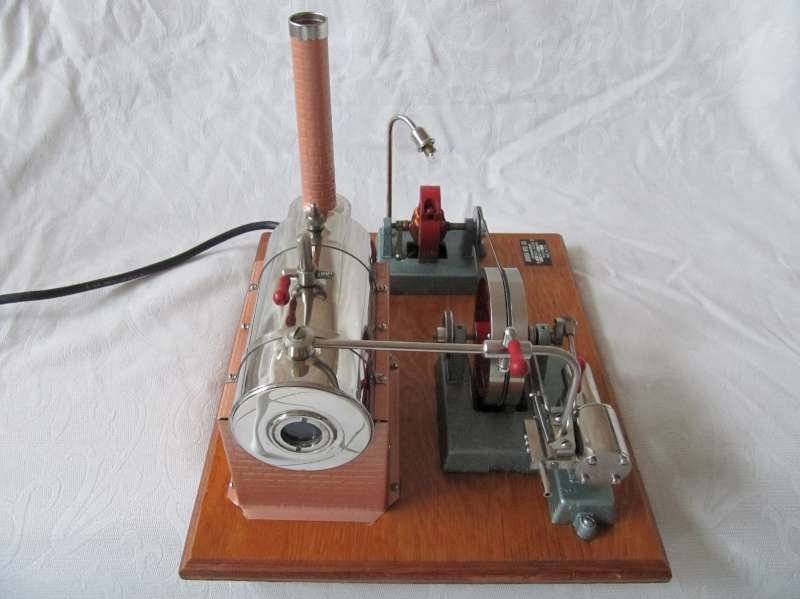 Another Jensen classic, that has lived through the test of time.

Like the model 5, this one is in my opinion a must in any serious Jensen collection.

The 25 was introduced in the early 30´s, and is still a vital part of the productionline.

This engine has seen a few changes through the year, with the most obvious being the introduction of the Stephenson´s Linkage in the mid 50´s, and the switch from cast iron to stamped engine base in the early 60´s, when the brick embossed fireboxes also was introduced. 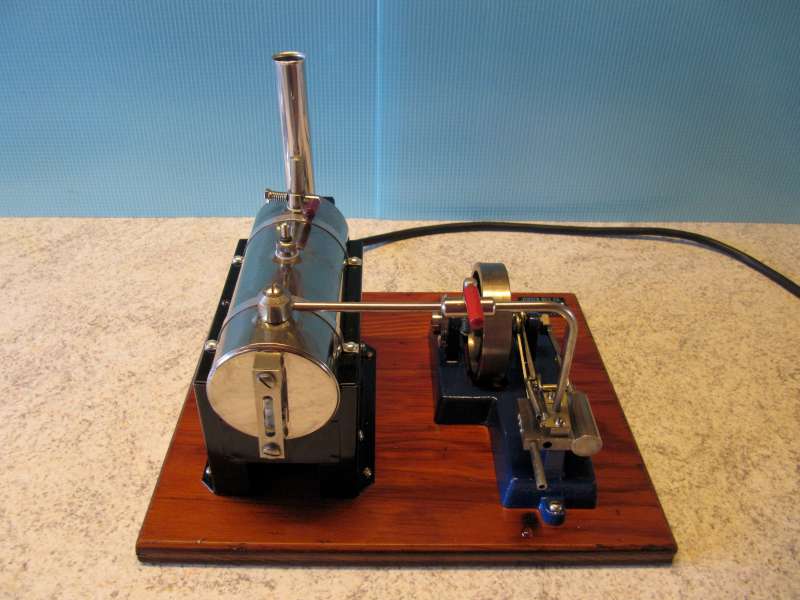 One of the few Jensen vertical boiler plants, with its engine being the same as the one found on the Jensen 25.

As none of these lives here...unfortunately, i would like to extend my sincere thanks to John "SteamerJ", who kindly agreed to shoot and share a picture of his, so that this model could be illustrated on the page as well. 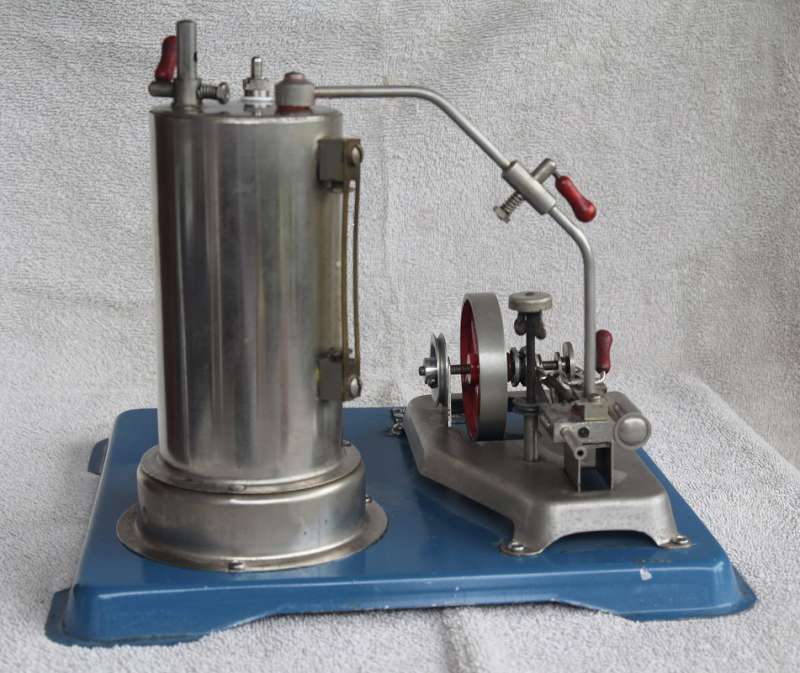 Finally managed to hunt one of these down, and ad it to the collection here.

It´s a slightly earlier version than John´s above, being mounted on a wood base.

Unfortunately this particular engine stirs a bit of ambivalence, as it solely came up for sale, due to the untimely death of a friend and fellow Jensen aficionado. 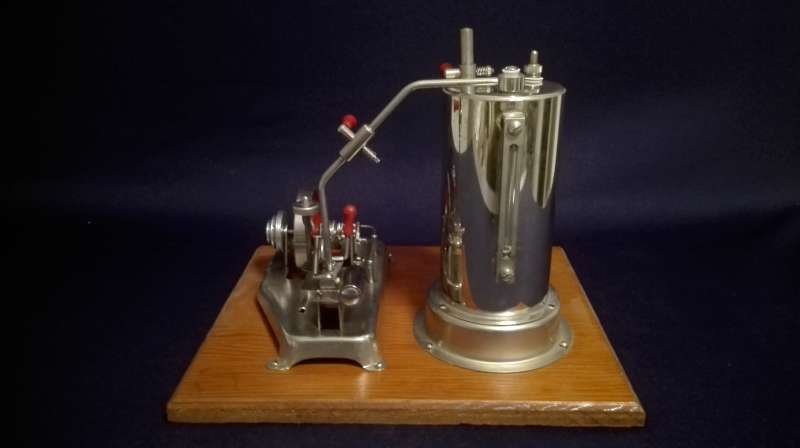 Jensen´s first overtype, made in several variations from the early 30´s until approx. 1960. 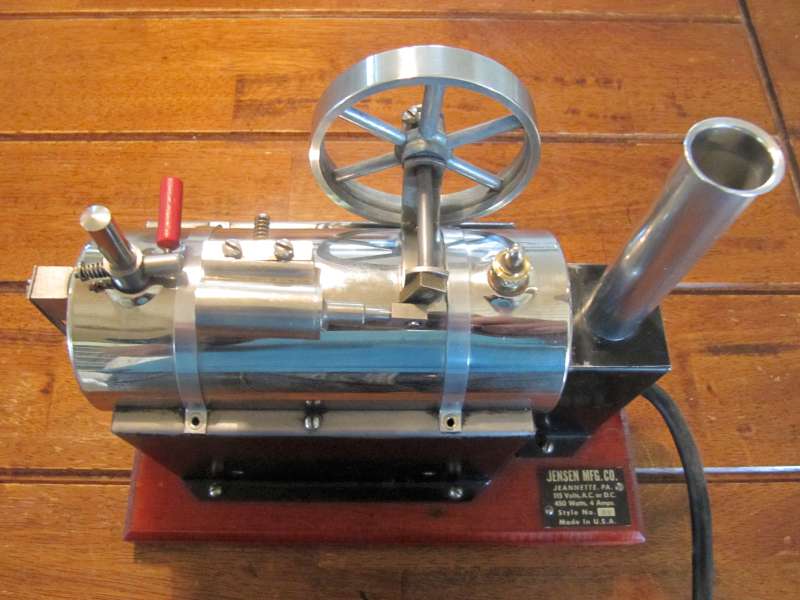 A semi-rare engine to encounter, with its relatively short lifespan from approx. 1960 to the mid-60´s.

As none of these lives here...unfortunately, i would like to extend my sincere thanks to Gil "Redryder" and Randy Calhoun, who kindly agreed to shoot and share pictures, so that this model could be illustrated here as well. 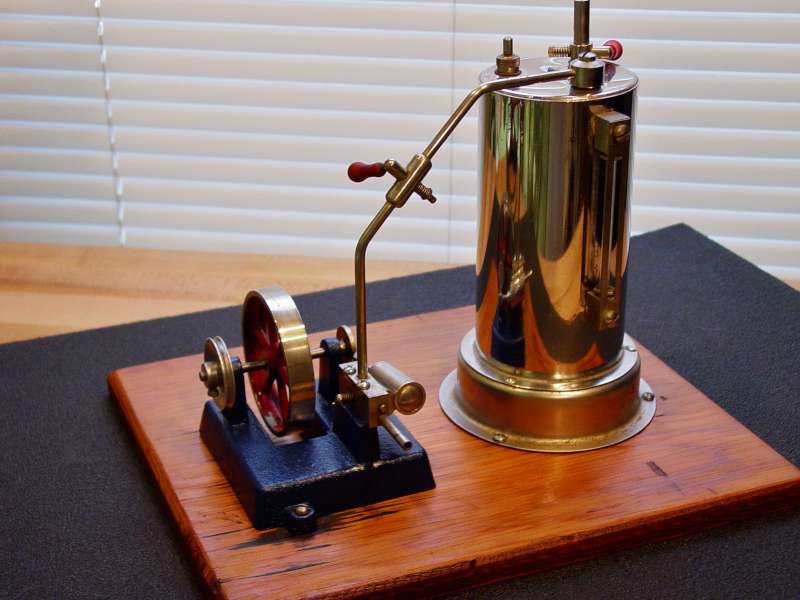 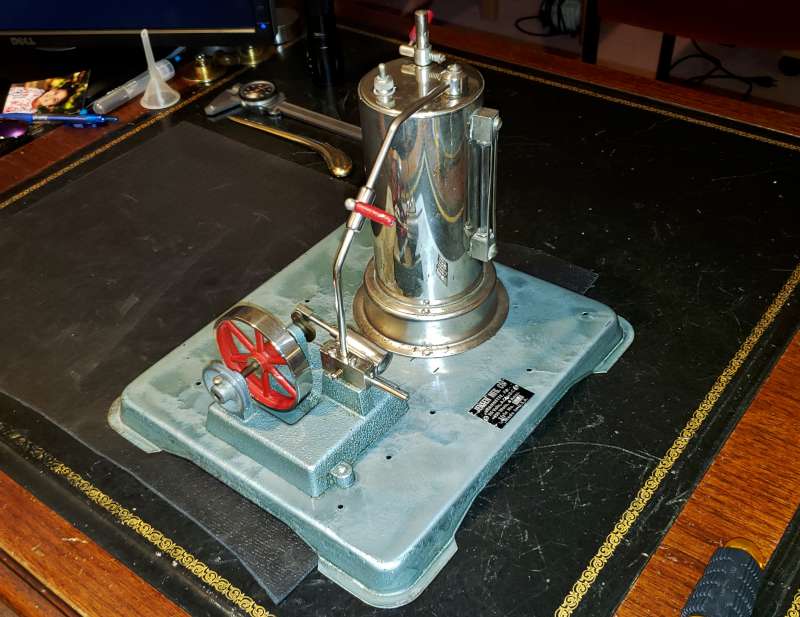 Jensen´s only real vertical engine, made from the late 40´s to the late 50´s, in two variations. One being brass boiler and loose appliance powercord, the other with a tinboiler (due to metal restrictions during the Korean War) and fixed cord through a Heyco restraint.

Collectionwise, the brassboiler version is preferred by many, as the tinboilers is VERY proned to rusting through.

Finding a functional intact tinboiler 45, is considered quite rare these days, and they do tend to climb higher than brassboiler versions pricewise, but it should be considered before investing, that it most likely will be a pure shelfqueen, as using it with the issues it has, will render it close to worthless should it rust through. 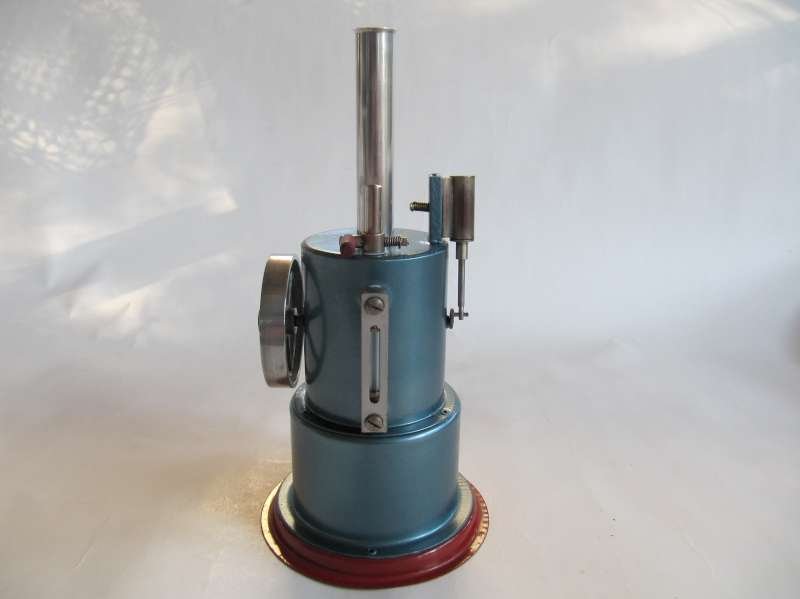 The Holy Grail of Jensen engines for many collectors.

This biggie was offered since the late 30´s until 2010, where it was officially decommisioned.

Fortunately Jensen has decided to re-introduce this iconic plant from this year (2016) !!!

As this model still forms a major hole in my own collection, i´ll extend my thanks to Bruce "St. Paul Steam", for his kindness in lending me a picture of his lovely mid-40´s version. 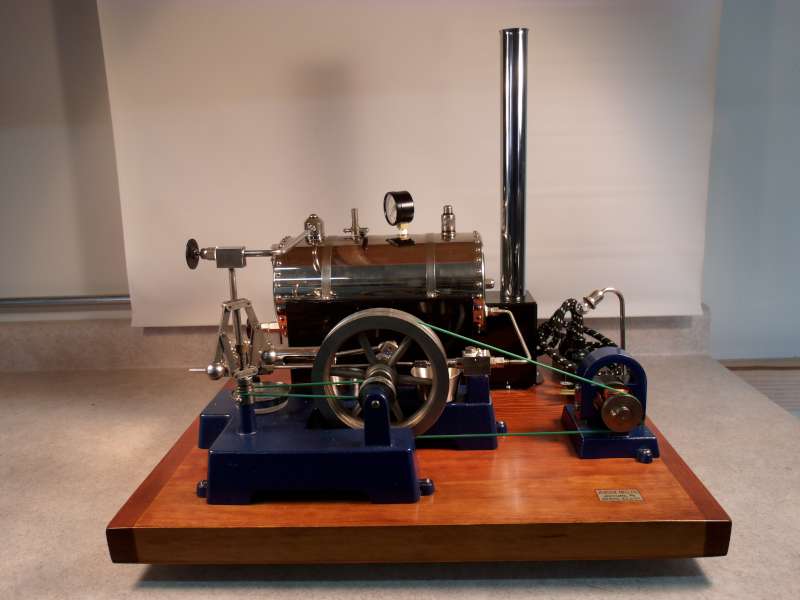 It was introduced in the late 40´s, and its popularity has kept it securely in the productionline until today. 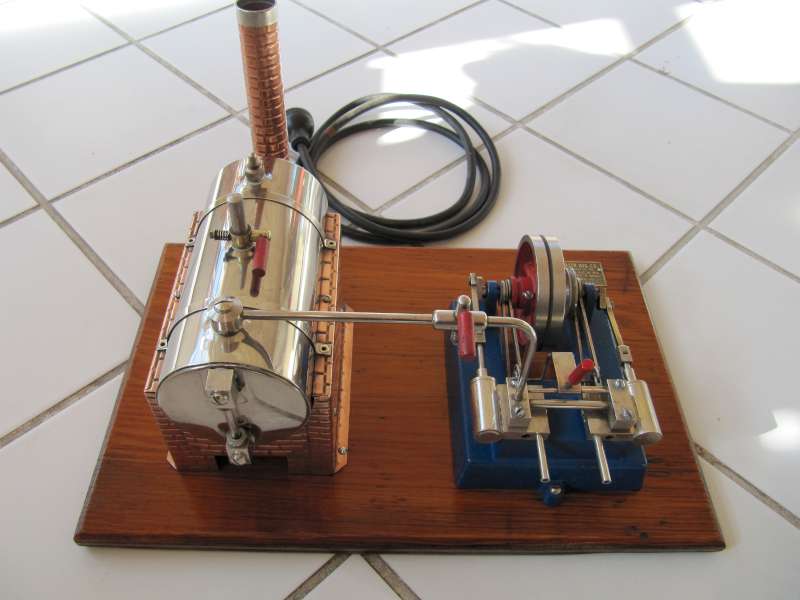 Jensen´s second smallest engine, but still a quality workhorse, whether factory built or as a kit as shown below. 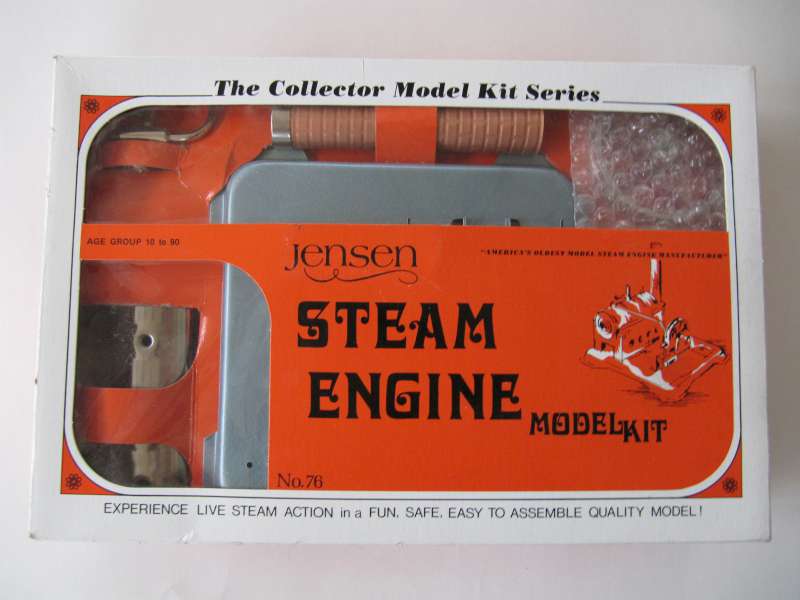 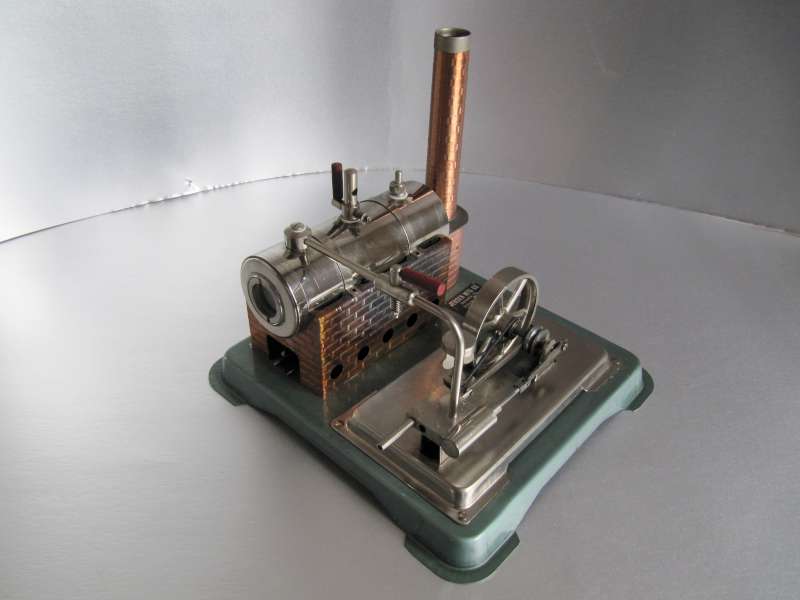 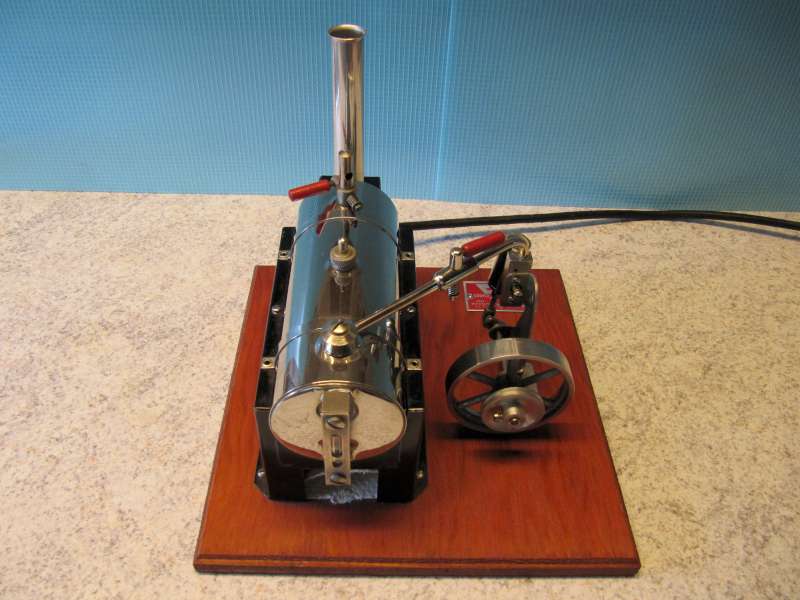 A relatively rare engine, built from the late 40´s to sometime in the 50´s. Appears to be an alcoholfired "Jensen 70" , but it does have a different cylinder (same as the model 45), on top of the obvious alcoholheater.

Another "wanted" here, but until Lady Luck decides to smile upon me, i am very thankful to be allowed to display Daniel´s "Stoker" fine example below. 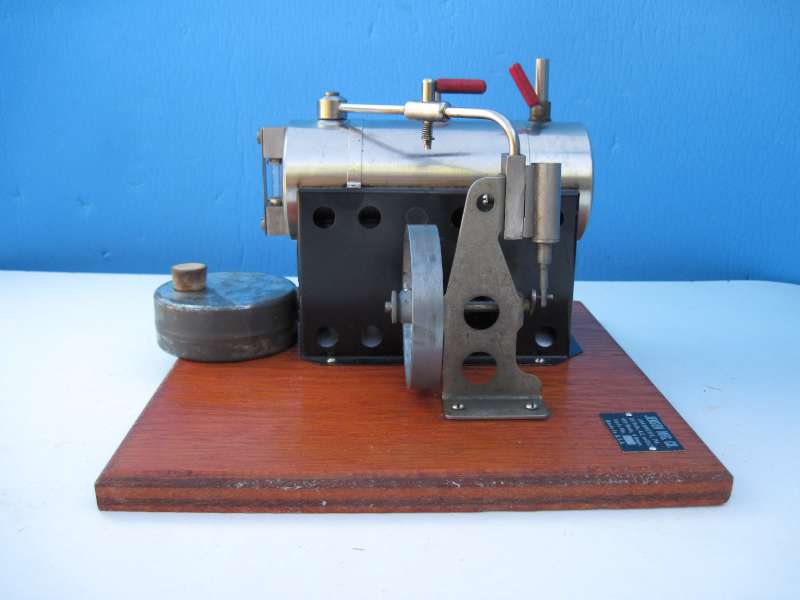 Lady Luck appearently decided to throw a smile my way at last, as i´ve finally managed to secure not just one, but two of these.

Two might sound like "overkill", as they´re (nearly) completely identical to Daniel´s shown above, but there is some reason behind this appearent greedy behaviour.

These engines was sold with two different tags, and i "needed" both represented.

Model was launched in 59-60, and is still in production today. 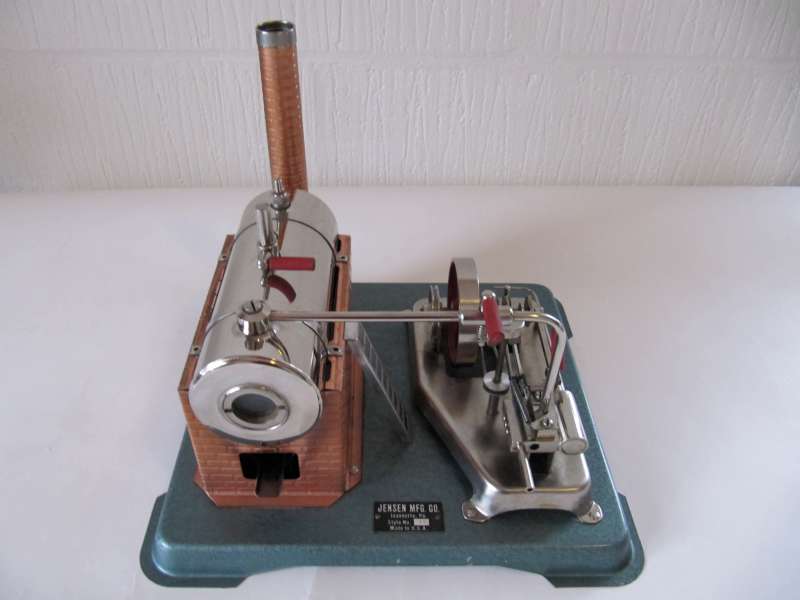 The information on these is very scarce to say the least, but according to Indianarog.com, it is believed to be made at some point in the 1980´s.

As none of these lives here...unfortunately, i would again like to extend my sincere thanks to Gil "Redryder", who kindly agreed to shoot and share pictures, so that this model could be illustrated here as well. 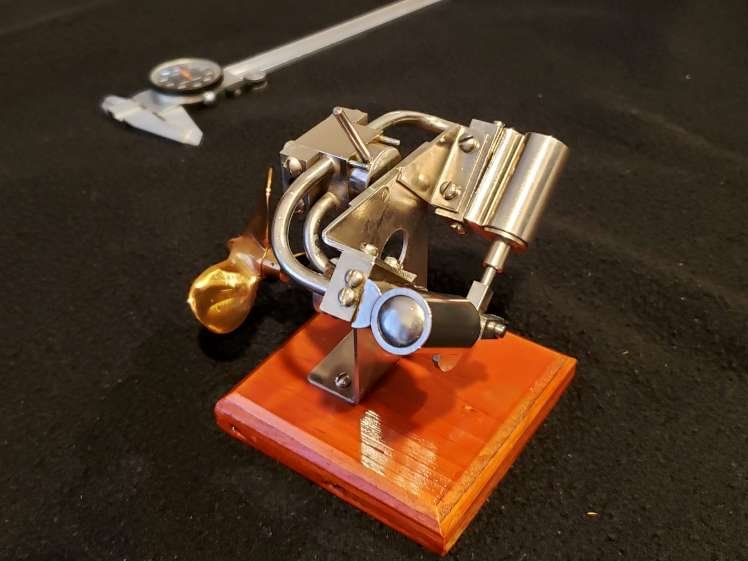 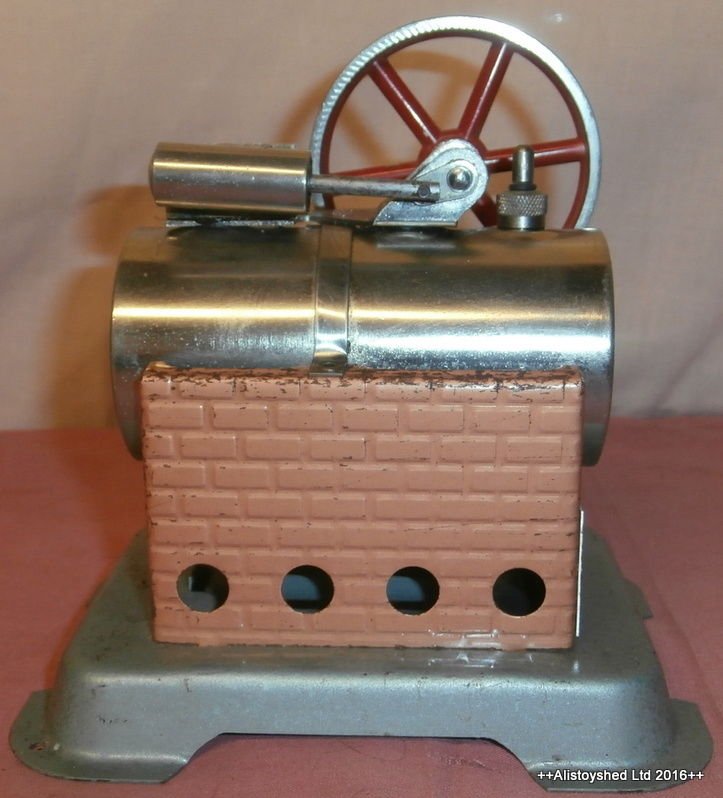 This one is even rarer, due to the fact that it was part of a 15 engine batch, ordered by an Israeli company named "Eshed Robotec Ltd" back in 1999.

The biggest and most obvious difference to the standard 85G, is the pegs for the 15E generator, allowing external poweroutlet/inlet. 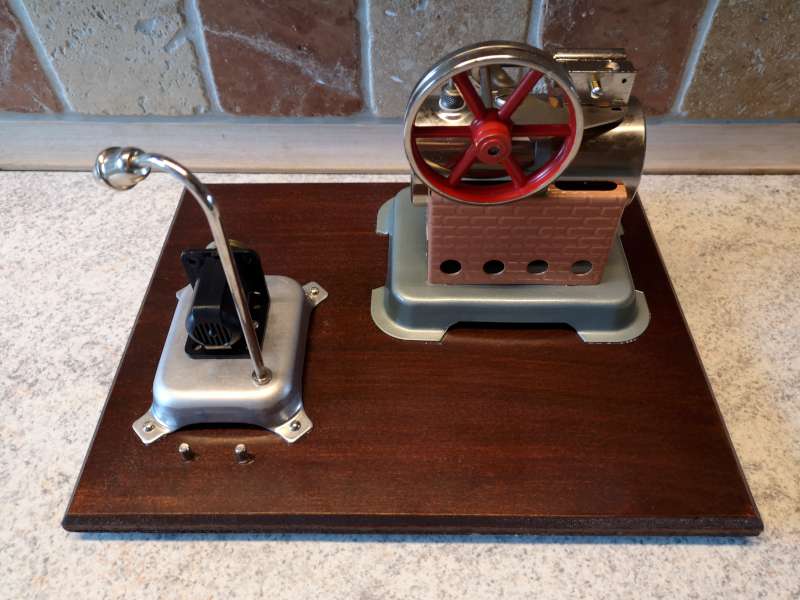 The "Atomic Plant" Jensen is another very rare engine to encounter.

As none of these lives here...unfortunately, i would again like to extend my sincere thanks to Gil "Redryder", who kindly agreed to shoot and share pictures, so that this model could be illustrated here as well. 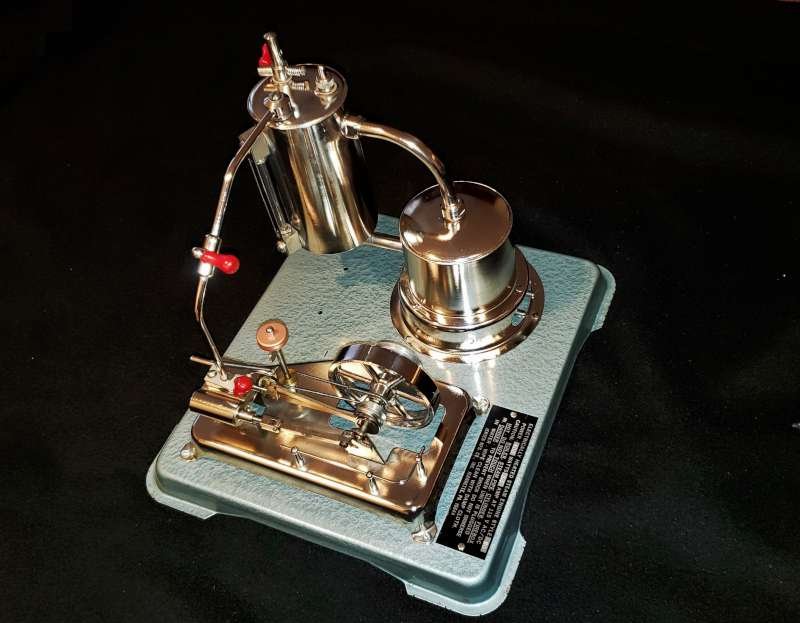 Steam turbine plant introduced in 2006, consisting of a Jensen 3" boiler, a model 15 generator, and a steam turbine designed and built by Gintschel Modellbau, Germany. 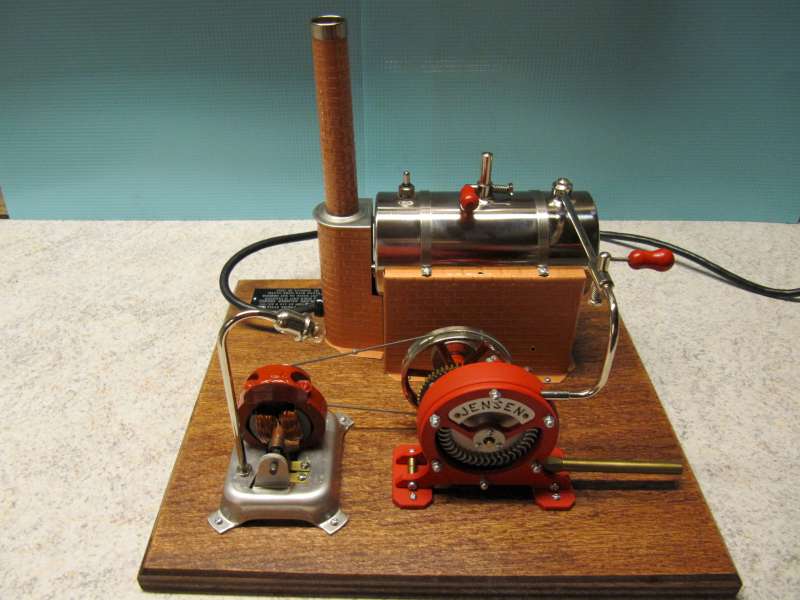 The tools was a direct copy, of the ones made by the Danish manufacturer H. Lange´s Legetøj.

Only difference being, that Jensen´s versions was approx. 1/3 bigger than the originals. 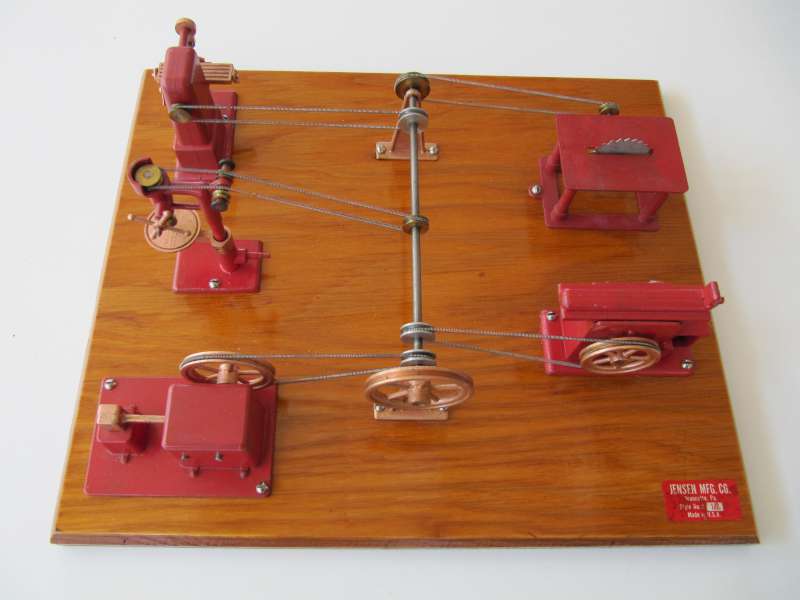 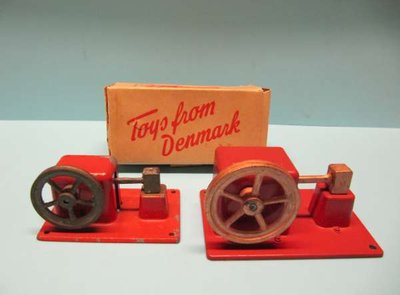